The origin of the present city of Castellón de la Plana is located in the closeness of the Mount of la Magdalena. Its term was conquered in 1233, and during the 13th century the place was given to members of high nobility who would not consolidate the Manor. In the year 1239 was awarded with settlement charter and the population was settled in the more fertile land of the plain, around the farmstead of Benirabe. In 1297 James II regained the place to the Crown. At the end of the fourteenth century the population was refortified and artillery. 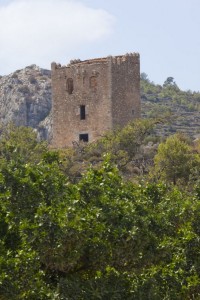 Actively participated in the War of the Germania in favor of the rebels, so that after his defeat at the hands of the Duke of Segorbe the city was sacked and its leaders executed.

During the War of Succession maintained the cause of the Archduke Charles. Until then no record of Castellón was walled, but after the defeat of the Duke of Berwick Almansa demanded the demolition of the fortifications.

During the War of Independence, it was the scene of numerous Castellón actions weapons. Taken by Marshal Suchet, the French remained there until 1814, despite the harassment of the Franciscan guerrilla nicknamed 'The Frare'. During the Carlist Wars remained faithful to Isabel II, so it was repeatedly besieged by the troops of General Cabrera.

This is an excellent example of the various defense towers in the area. It presents a powerful square crenellated tower. Besides this, there were other similar towers, which were cast down in most cases to new construction.

The Torre Alonso is listed as asset of Cultural Interest, and is registered in the National Heritage and Cultural Heritage of the Generalitat Valenciana.