At the beginning of the twentieth century, the municipal market is the subject of special concern on the part of the Town Hall.

In 1902 the town councilor Jose Castello Tárrega, draws up a report about its working, reproduced by El Heraldo de Castellón, of whose newspaper was director and in which it proposes the construction of an enclosed space.

In 1913 were built two huts in the Constitution square and the Pescadería square, background of the current Central Market.

In 1925, the Town Hall chose, through competition, the plan of town planning whose author was Vicente Traver Tomas and in which, among other reforms, raises the remodeling of the Old Square and the construction of the new market on the south side of the same, issue that didn’t happen until after the Civil War.

On 21st December 1949, took place the blessing and official opening of the Central Market in a highly popular event. A year before, in 1948, the Council decided to remove the shed that had occupied the square, to which the corporation would return a few months after the title of Major. The municipal architect Francisco Maristany presented a descriptive report of the project of "transfer, relocation and expansion" of the market. On 10th April 1949 began the works, and meanwhile, the posts were moved temporarily to the Rey square and Huerto Sogueros square.

The new fishmonger, attached to the central market was built in 1964 and its posts dealing with the square of the Flea Market, since they left in 1951 the Pescadería square. 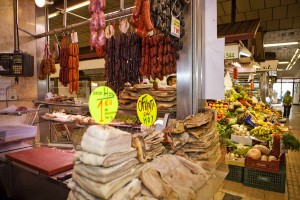